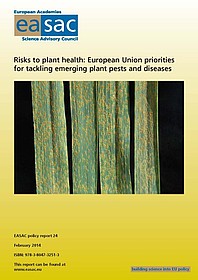 The introduction and spread of pests and diseases among food crops and other plant species in forestry, horticulture and natural habitats has significant consequences for sustainable agriculture, environmental protection and ecosystem services. The European Commission has recently proposed reform to plant health legislation to prevent and control the cross-border entry and spread of such threats.

They have acknowledged the problem by upgrading certain existing protective measures against plant pests and diseases. However, EASAC wants to see these accompanied by broader policy development and strategic action across:

In line with previous reports on controversial scientific issues, EASAC stresses that public awareness of the associated scientific, environmental, economic and strategic issues is crucial.

The report was launched during an official event at Edelman The Centre in Brussels on 10 March 2014. Prof. Anne Glover, Chief Scientific Advisor to EU Commission President Barroso, who had welcomed the report, was the first respondent to the report and moderator of the subsequent panel discussion.