Second term of Jörg Hacker as President of the Leopoldina 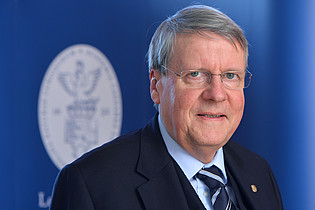 On 18 September 2014, the microbiologist Prof. Dr. Jörg Hacker was re-elected as president of the German National Academy of Sciences Leopoldina in a secret written vote by the Leopoldina Senate. On 1 March 2015 he will begin his second five-year term as the head of the academy. Jörg Hacker has been at the helm of the Leopoldina since 2010.

Regarding the objectives of his second term, Jörg Hacker says:

“Communicating with people is crucial to fostering an understanding of research and faith in those who do it. Intensifying our communication activities will be one of the goals of my second term in office, starting in March 2015. Another major theme for the coming years will be networking within the academy and collaborating with other academies and research institutions. Working groups will interact even more than they do now. The overall goal is to make our policy advice even more consistent.”

Jörg Hacker has also done extensive work outside of Germany including two six-month research projects at the Institut Pasteur in Paris in 2000 and 2005. In 2006, he also accepted a position as guest professor at Tel Aviv University (Israel) as a Fellow of the „Sackler Institute for Advanced Studies“. Before being elected academy president, Jörg Hacker was the Director of the Robert Koch Institute in Berlin. From 2003 to 2009 he was the Vice President of the German Research Foundation. In the past year Hacker was appointed to the UN Secretary General’s Scientific Advisory Board, which confers with the General Secretary of the United Nations on scientific matters. Jörg Hackler has been a member of the Leopoldina since 1998.