Distinctions of the Academy 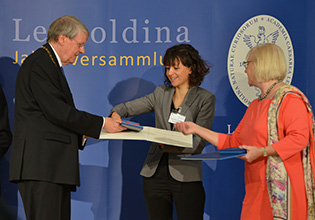 The microbiologist Emmanuelle Charpentier receives the Carus Medal in 2015. Image: Markus Scholz for the Leopoldina.

The Leopoldina confers awards in form of medals, prizes and honorary memberships in recognition of outstanding scientific achievements.

The Academy’s highest honor, the Leopoldina Honorary Membership, is reserved for members who are particularly deserving due to their scientific merits and their service to the Academy.

The physicists Max Planck (1941) and Werner Heisenberg (1967) are among those who have received this honor. In 2010, former Leopoldina President Volker ter Meulen was awarded Honorary Membership for his work leading up to the Leopoldina’s appointment as the German National Academy of Sciences.

The title of Honorary Sponsor is awarded to non-members, who nevertheless have made a significant  contribution in their field to benefit the Academy. Berthold Beitz (1987) and Wolfgang Frühwald (1995) are among those who have been awarded this title.

In 2012, the Leopoldina introduced the Emperor Leopold I. Medal, which is awarded to personalities of public life, who have rendered outstanding services to science.

Thieme Award of the Leopoldina for Medicine

Georg Uschmann Award for the History of Science