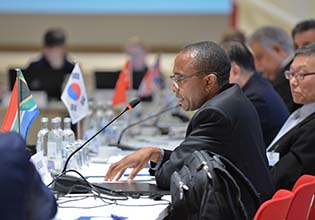 Science transcends borders. Science diplomacy builds upon the reputation, the networks and the entire repertoire of science to improve international relations. It can be an influential tool in building bridges between societies and developing common strategies to overcome global challenges. Moreover, it defends universal human rights and is actively involved in multilateral processes.

Science diplomacy is versatile. When official channels are restricted, it can restore trust and build credibility, whilst contributing to the consolidation of existing partnerships and a better mutual understanding of international relations. Science diplomacy enables constructive dialogue across national and cultural borders because it relies on the universal language of science and it is guided by academic values and standards. Science diplomacy also supports scientists all over the world who are subjected to repression and human rights violations. Another dimension is the utilization of scientific expertise to overcome global challenges and acute crises.

The Leopoldina is actively engaged in various forms of science diplomacy:

Human Rights Committee of the Leopoldina

The Human Rights Committee of the Leopoldina (HRC) supports scientists all over the world who are subject to repression for no other reason than their scientific work. The Leopoldina is a member of the International Human Rights Network of Academies and Scholarly Societies (H.R. Network).

The Leopoldina has been coordinating the Joint Science Conference of the Western Balkans Process / Berlin Process since 2014. This platform assembles national representatives of education and science systems from 14 countries. It offers recommendations to the Heads of State and Government for the improvement of education and science systems in connection with the accession of the Balkan countries to the EU. It facilitates stronger regional cooperation in South Eastern Europe.

Prof. Dr. Jörg Hacker, President of the German National Academy of Sciences Leopoldina from 1 March 2010 to 29 February 2020, represents the German Federal Government in the European Science Advisors Forum (ESAF), the forum of the chief scientific advisors of the EU member states. He was also a member of the UN Secretary-General’s Scientific Advisory Board (UNSAB) from 2014 to 2016. At UNSAB, 26 scientists from all over the world advised the UN Secretary-General on global sustainability issues.