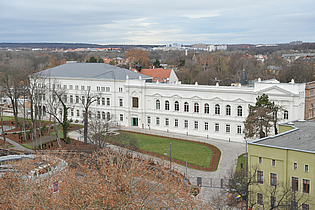 The Deutsche Akademie der Naturforscher Leopoldina has been the German National Academy of Sciences since 2008. It scientifically reviews and addresses key issues of prospective significance for society. The Academy operates irrespective of political and economic objectives. Its findings are conveyed to policy makers and the public alike, and nationally and internationally advocated.

The Deutsche Akademie der Naturforscher Leopoldina was appointed the German National Academy of Sciences on 14 July 2008. The legal basis for this act was a resolution passed by the Joint Science Conference of the Federal Government (GWK) and its federal states on 18th February 2008. Since then, the Federal President of Germany has been the patron of the Leopoldina. The Academy is independently run and dedicated to the common good.

The idea behind founding a national academy was to create a legitimized scientific institution, operated irrespective of political and economic objectives, which would scientifically review and study future societal issues. Its findings should be conveyed to policy makers, made accessible to the public, and nationally and internationally advocated by the academy.

The German National Academy of Sciences Leopoldina is a registered non-profit organization. It is financed by public funds from the Federal Ministry of Education and Research (80 percent) and the state of Saxony-Anhalt (20 percent), where its headquarters are located. As a supranational association of scientists with a base of about 1,600 members from more than 30 countries, the Leopoldina is the largest among German science academies.

The Leopoldina was founded in 1652 in Schweinfurt/Germany and is thus the oldest continuously existing academy of natural sciences and medicine in the world. The Academy selects its members among outstanding scientists. Since its foundation over 7,000 individuals were appointed members. These include, among others, Marie Curie, Charles Darwin, Albert Einstein, Johann Wolfgang von Goethe, Alexander von Humboldt, Justus von Liebig and Max Planck.

After years of travel while changing location following its respective president, the Leopoldina eventually settled in 1878 in the Central German city Halle upon the River Saale. In the beginning of 2012, the Academy relocated to its new headquarters at Jägerberg in Halle, a suitable location to assume and grow into its new role as German National Academy of Sciences. The German federal government and the federal state of Saxony-Anhalt financed the purchase and refurbishment of the property.

In addition to its headquarters in Halle, the Leopoldina has had an office in the government quarter of Berlin since 2009, which offers convenient proximity to policymakers, the media and international delegations and therefore firmly anchors the Academy in the heart of the political action in Berlin.

Statutes of the Leopoldina

Brochure “A tour of the German National Academy of Sciences Leopoldina“

The members of the Leopoldina are organized in 28 sections that are grouped in four classes.

The Leopoldina publishes a report about its work as National Academy of Sciences on a yearly basis.