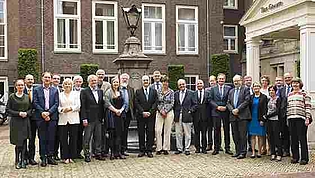 The European Science Advisors Forum (ESAF) is an informal forum of the Chief Scientific Advisors of the EU Member States’ governments. It contributes to strengthening evidence-based policy-making and serves as a forum for sharing best practices in science-based policy advice. ESAF also promotes synergies between advisory structures and mechanisms at national and EU level.

ESAF is independent of the European Commission’s Scientific Advice Mechanism (SAM). Members are nominated by their respective national governments. A total of 22 member states are currently participating. The German Federal Government has nominated Leopoldina President Professor (ETHZ) Dr Gerald Haug as Germany’s representative to the ESAF. ESAF members met for the first time in Copenhagen in June 2014. Further meetings of followed in Manchester in July 2016, Amsterdam in June 2017, Tallinn in June 2018, Dublin in June 2019 and virtually in June 2020.