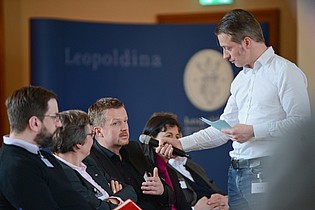 Artificial intelligence, surrogacy, genetic engineering - these buzzwords trigger broad social debates. Such discourses demand both, the voice of science and the voice of the media. The Leopoldina journalist collegium links both sides, communicates scientific findings and facilitates joint discussions on the opportunities and benefits of research.

The Leopoldina Journalist Collegium 2019 deals with the question “What is artificial intelligence capable of and what is it not?” The seminar from October 10th through 12th at the research center in Jülich will convey the scientific background of artificial intelligence (AI) and present current fields of application for AI. The fundamentals of machine intelligence, its opportunities and challenges, and the consequences of an AI-based society will be discussed in a public commons debate. More

Since 2012, the Leopoldina Journalist Collegium has regularly provided a platform for editors to obtain detailed information on current topics of science-based policy advice at the National Academy of Sciences. The seminars are attended by members of the Leopoldina as well as distinguished academics who provide in-depth insights into their current research. The lectures, discussions and commons debates focus on the relevance of scientific results for society and the often far-reaching consequences of scientific breakthroughs. As a result, new networks in science may be established and research opportunities might be opened up. In recent years, the topics of genome editing, reproductive medicine, and digitization have been the focus of the Leopoldina Journalist Collegium.

Between 2012 and 2018, the Robert Bosch Stiftung and the National Academy of Sciences Leopoldina implemented a program for experienced editors in form of the “Diving into Science” journalists’ college. The training series was aimed at journalists who were not working in science and research departments but had an interest in scientific topics. With the motto “Immerse and go deeper”, they visited renowned research institutions in Germany and abroad, got to know science up close and exchanged views on scientific journalistic issues. A total of 75 journalists took part in the dives. More