The motto in 2012 was “Project Earth: Our Future”. The year was dedicated to research on sus-tainable development. The topic of sustainability in the sense of a commitment to ecological bal-ance, economic security and social justice can only be systematically understood with the cooperation of scientists from the most diverse disciplines. The “Science Year 2012 - Project Earth: Our Future“ created an outstanding dialogue format for these questions which the German National Academy of Sciences Leopoldina took advantage of by staging public discussion events.

One of these events focused on the meaning of sustainable actions for people living in democratic societies. How does the concept of sustainability relate to our traditional understanding of justice? In the discussion, social science analyses of the consequences of ecological changes were coupled with humanities reflections on the changes in our thinking about people, society and na-ture. This encourages a more intense exploration of “sustainability versus freedom and justice” and promotes the dialogue between science and the public.

At the discussion event on 17 October 2012 in Halle, two renowned experts presented their views on the concept of sustainability in keynote speeches. These positions were then debated in a moderated discussion. Afterwards, the audience was invited to pose questions and join in. 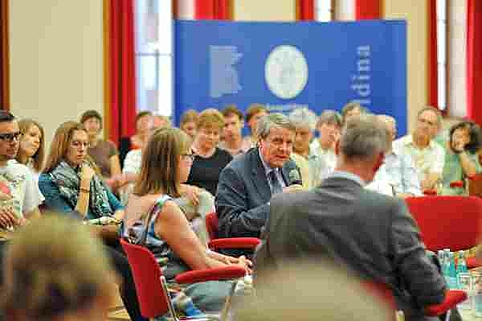 Website of the Science Year 2012 – Project Earth: Our Future

Federal Ministry of Education and Research

Events in the Science Year 2012