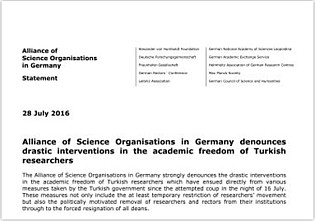 The Alliance of Science Organisations in Germany strongly denounces the drastic interventions in the academic freedom of Turkish researchers which have ensued directly from various measures taken by the Turkish government since the attempted coup in the night of 16 July. These measures not only include the at least temporary restriction of researchers’ movement but also the politically motivated removal of researchers and rectors from their institutions through to the forced resignation of all deans.

In a very short time, already existing tendencies to restrict academic freedom in Turkey have become dramatically pronounced due to the escalation of the political situation. The positive overall development of science in Turkey and the international networking of the Turkish science system, amongst others with German scientific institutions, are acutely endangered.

The Alliance of Science Organisations calls on the Government of Turkey to conduct its ongoing investigations into the participation of universities and research institutions in the attempted coup strictly within the framework of legitimate constitutional procedures.