Antibiotic resistance, tropical diseases, and the future of the oceans 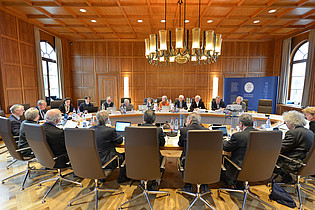 What antibiotics will be able to effectively treat infectious diseases in the future? How can we better combat diseases that predominantly afflict people in the world’s poorest regions? What measures could provide sustainable solutions for the use and protection of our oceans? These are the questions scienctists have addressed during a meeting at the German National Academy of Sciences Leopoldina in Halle (Saale). Under the leadership of the Leopoldina, they are preparing statements that will be sent to the heads of government in the run-up to the G7 summit at Schloss Elmau in June 2015 by the science academies of the G7 countries.

The statements will be handed over to Federal Chancellor Angela Merkel and published at the end of April. They are dealing with three topics: resistance to antibiotics, neglected and poverty-related diseases, and the future of the world’s oceans.

The science academies of the G7 countries have been advising heads of state and government in the lead-up to the summits for the past ten years. Before each summit, the members’ national academies look at urgent issues relating to the summit agenda that also carry wider implications and require a multilateral approach.

On each occasion, it is the host nation’s academy that assumes the role of coordinator – meaning that this year it is the Leopoldina. The German academy last led the scientific advisory process in 2007, in the run-up to the G8 summit in Heiligendamm. Back then, the science academies presented statements on the topics of sustainability, energy efficiency, climate protection, and the protection of intellectual property.