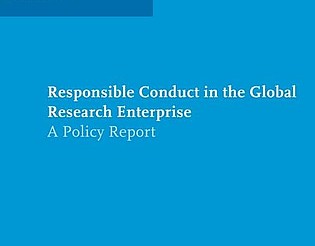 To encourage researchers around the world to adhere to universal science values and ethical behavior, a new report on responsible science has been issued by the InterAcademy Council and the IAP – the global network of science academies. The report is the first product of the IAC and IAP's project on scientific integrity, initiated in response to several major trends reshaping the research enterprise, including the increasingly global and interdisciplinary nature of science, its heightened role in policy debates, and the continued emergence of high-profile cases of irresponsible research behavior in many countries.

"Humanity has placed its trust in science to solve many of the world's toughest problems, and researchers must preserve that trust by working ethically and responsibly," said Indira Nath, co-chair of the authoring committee and emeritus professor at the National Institute of Pathology, New Delhi, India.  "All researchers have an obligation to act in accord with the values and principles of research integrity."

"Countries define and deal with irresponsible research practices in different ways, and some aspects of how research is conducted also vary widely among disciplines, countries, and cultures," said Ernst-Ludwig Winnacker, committee co-chair and secretary general of the Human Frontier Science Program, Strasbourg, France.  "Nevertheless, global standards of behavior reflecting the universal values of research are not only possible, but necessary."

Detailed Press Release on the Subject

„Responsible Conduct in the Global Research Enterprise: A Policy Report“