Improving Knowledge of Emissions and Sinks of Greenhouse Gases (2012) 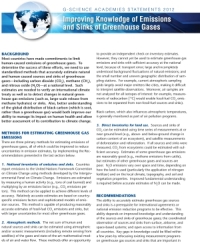 Most countries have made commitments to limit human-caused emissions of greenhouse gases. To determine the success of these efforts, we need to use
standardized methods that accurately estimate natural and human caused  sources and sinks of greenhouse gases—including carbon dioxide (CO2), methane (CH4), and nitrous oxide (N2O)—at a national level. Such estimates are needed to verify an international climate treaty as well as to detect changes in natural greenhouse gas emissions (such as, large-scale release from methane hydrates) or sinks. Also, better understanding of the global distribution of black carbon (which is soot, rather than a greenhouse gas) would both improve our ability to manage its impact on human health and allow better assessment of its contribution to climate change.

Improving Knowledge of Emissions and Sinks of Greenhouse Gases 2012 (Pdf)