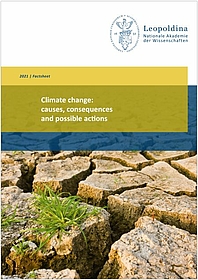 Published by the National Academy of Science Leopoldina

The factsheet is divided into three sections: causes, consequences and possible actions. In the chapter “Causes of climate change”, phenomena such as the greenhouse effect are explained and the development of atmospheric greenhouse gas concentrations in the course of earth's history is described, along with the speed of human-induced global warming. The chapter “Consequences of climate change” covers topics such as extreme weather events, the rising sea level, drought and the consequences of climate change for health and food security. The role of tipping points in the climate system is also explained.

Previously agreed emissions reductions are discussed in the chapter “Measures to counteract climate change”. Other topics include technologies for “negative emissions”, carbon pricing, natural carbon sinks such as soils, forests and oceans as well as the distribution of the remaining emission budget as a political and ethical issue.

Graphics for the Factsheet

All graphics in the factsheet are licensed under the Creative Commons licence CC BY-ND 4.0. They may be used freely in unmodified form with credit to the author "Leopoldina/Infografiker.com".