This collection of Haeckel´s letters will lead to an accurate depiction of the variety and interconnected nature of his activities and represents in its amplitude one of the most comprehensive sources of information about the cultural history of the sciences in the period around 1900. Besides clearly depicting Haeckel´s personal and scientific pursuits, the exchange of letters also makes clear his importance to the professional, social and cultural consolidation and integration of the natural sciences within the European sphere and beyond.

Unlike the independent scholar Darwin (1809-1882), Haeckel, who was 25 years younger and had been socialized and had established his reputation as a scientist within the continental setting, belonged to the second generation of evolutionary biologists. That status accorded him the opportunity to initiate an ideologising of the life sciences, a process that deeply influenced the social, political and artistic attitudes of the day. In doing so he came to epitomise the advent of a completely new province in contemporary and scientific history. This accounts for the fact that not only Haeckel´s correspondence with scientific colleagues is found among his letters, but also numerous letters sent to him by people from the most varied social classes from many different European and non-European countries. 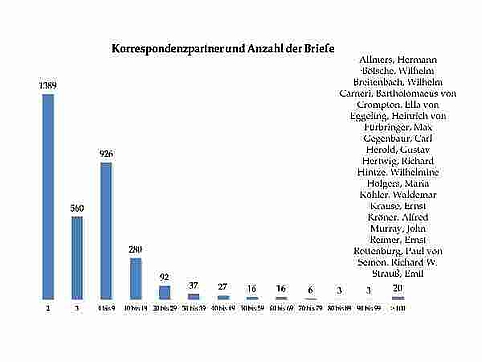 Ernst-Haeckel-Haus at the University of Jena (German)