Goethe as member of the Leopoldina 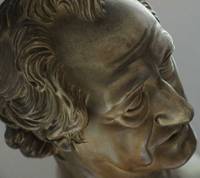 Bust of Goethe from the Leopoldina archive, photograph: David Ausserhofer/Leopoldina

Scientific studies played a significant role in Goethe’s life and writings. Driven by practical concerns stemming from his official duties, his preoccupation with nature in the course of his life became an important aspect of his understanding of the world. The influence that Goethe’s interest in the natural sciences had on his thinking and actions found its artistic expression primarily in his poetry.

During Goethe´s lifetime, the level of esteem that he enjoyed as a poet was not accorded him for his scientific research and writings. The experts of his day saw him as an amateur whose opposition to recognised principles was based on ideas that lacked sufficient substantiation. It was only upon the advent of a new generation of scientists under the sway of the German philosophy of nature that Goethe’s work gained the recognition it deserved.

Included in that generation was the botanist Christian Gottfried Daniel Nees von Esenbeck  (1776-1858), who became the President of the Leopoldina in 1818. Goethe was one of the first to be selected for membership in the academy during Esenbeck´s term of office. He was given the cognomen Arion IV (diploma from 26 August 1818). Both succeeding presidents also cultivated personal relationships with Goethe. Dietrich Georg Kieser (President from 1858 to 1862), who became Professor of Medicine in Jena in 1812, made personal visits to Goethe on numerous occasions. Goethe carried on an interesting correspondence dealing with scientific and artistic questions with the doctor and painter Carl Gustav Carus (President from 1862 to 1869). In the printed text “Goethe. Zu dessen näherem Verständnis” (Goethe. Towards a Greater Understanding), Carus delineates the portion of Goethe´s complete works dealing with natural science.

Characteristics of the Edition (German)

Goethe as member of the Leopoldina

Overview of the volumes (German)

History of the Edition (German)