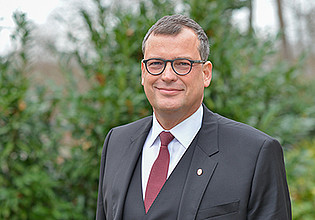 Photo: Markus Scholz for the Leopoldina

Climate researcher Gerald Haug took office as President of the National Academy of Sciences Leopoldina on March 1, 2020. Haug, who is elected for a five-year term, succeeds the microbiologist Jörg Hacker. Pursuant to the statutes, Hacker, who has headed the Academy since 2010, could not be re-elected after two terms of office. Gerald Haug (born 1968) is the XXVII President of the Leopoldina.

Gerald Haug was elected as a member of the Leopoldina’s Earth Sciences Section in 2012. From 2015 to 2020, he was a member of the Senate of the Academy. In 2016, he was elected as spokesperson for Class I: Mathematics, Natural Sciences and Engineering. Haug contributed to multiple science-based policy advice publications, including last year as one of the two speakers of the working group "Climate goals 2030: Towards a sustainable reduction of CO₂ emissions". In 2015, Haug co-authored the statement on the future of the Earth’s oceans developed by the G7 countries’ academies of sciences in preparation for the summit in Elmau and ultimately submitted to the heads of state and government of the G7 countries.

Gerald Haug is a climate researcher, geologist and paleoceanographer. He conducts research into climate change over the last thousands and millions of years. As part of this work, he examines sediment cores drilled up from the bottom of oceans and lakes. The chemical composition of the various layers of sediment reveals information about the climate conditions at the time when each layer was deposited. Haug uses this research to reconstruct climate conditions throughout history and how they have changed. He also researches the correlations between the climate and cultures.

Video of the event to celebrate the change in office