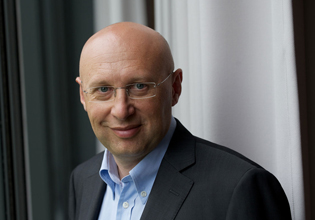 Leopoldina member Stefan W. Hell will be awarded the 2014 Nobel Prize for Chemistry. He will be awarded the prize along with the American scientists Eric Betzig (Howard Hughes Medical Institute in Ashburn, Virginia) and William Moerner (Stanford University) for the development of super-resolved fluorescence microscopy. Hell is being commended for his discovery of the first microscopic method with which it is possible to use focused light to attain resolutions far below the wavelength of light.

This stimulated emission depletion method, called STED microscopy for short, has great importance for biomedical research. Optical microscopy has been until now the only method with which the special organization and dynamics of molecules in living cells or tissue could be detected. Betzig and Moerner were able to independently of one another establish the basis for a further method of fluorescence microscopy, the so-called “single-molecule microscopy”.

Leopoldina President Professor Jörg Hacker congratulated Stefan W. Hell for having been chosen for this honour: “This Nobel Prize acknowledges a great breakthrough in the area of optical microscopy. And that it is an active member of the Leopoldina that the Nobel Committee honours for this pioneering research makes the occasion particularly gratifying.”

Stefan W. Hell studied in Heidelberg where he earned his PhD in Physics. He had turned his attention to microscopy as early as his first dissertation. Beginning in 1991 he applied himself at the European Molecular Biology Laboratory in Heidelberg and at the University of Turku in Finland to the question of how optical microscopy could achieve resolutions in the nanometre range. Until that time it was presumed that the resolution of such microscopes was limited to half of the wavelength of light (200-400 nanometres). Similar objects in close proximity could no longer be differentiated from one another in an image. By developing his so-called “Stimulated Emission Depletion”, abbreviated as STED microscopy, Hell was able to refute this presumption.

Hell has been a member and Director of the Max Planck Institute for Biophysical Chemistry in Göttingen since 2002. In addition, he has been head of the “Optical Nanoscopy” Division at the German Cancer Research Center in Heidelberg since 2003. He became a member of the Leopoldina in the Physics Section in 2013. The Leopoldina awarded this top physicist its Carus Medal in September 2013. Stefan Hell also received the corresponding Carus Prize from the city of Schweinfurt in the spring of this year.

The Nobel Prize in Chemistry is currently endowed with a total of eight million Swedish kronor (equivalent to around 870,000 Euros). All Nobel Prizes are traditionally bestowed on the laureates on 10 December, the anniversary of founder Alfred Nobel’s death.