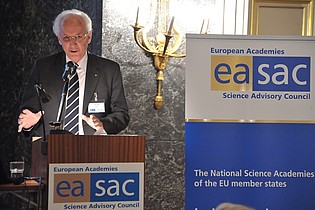 Robert McCredie May, Lord May of Oxford
Photograph: FKPH

The European Academies Science Advisory Council (EASAC), which brings together the national science academies of the EU Member States, has marked its 10th anniversary. The celebrations were hold at the Palais des Académies in Brussels. Official speeches were given by Professor Annette Schavan, German Federal Minister of Education and Research, and Lord May of Oxford, former Chief Scientific Adviser to the British Government and former President of the Royal Society.

Professor Volker ter Meulen, member of the EASAC Council, Immediate Past-President of EASAC and former President of the GermanNational Academy of Sciences Leopoldina, commented on this milestone event with the words: “For ten years, EASAC has been achieving great success in its work on providing scientific advice to policy-makers in EU institutions. EASAC gives European science a voice, and makes sure that voice is heard. The scientific topics we address are of European and therefore also of national importance.”

Since 2001, EASAC has produced over 30 scientific recommendations in the fields of biosciences, energy and the environment, and has made these available to the relevant decision-makers at EU level – in the European Commission, the European Parliament and the Council of the European Union. The national academies of sciences in the EU Member States are members of EASAC. Since 2010, the EASAC Secretariat has been run by the German National Academy of Sciences Leopoldina in Halle. It took over this responsibility from the Royal Society in London.

The EASAC’s current statement is entitled “Concentrating Solar Power: its potential contribution to a sustainable energy future”. It describes the potential that solar power plants have for helping ensure a sustainable future for our energy supply. One of the key declarations in the paper is that solar thermal power plants are a reliable technology that can play a major role in helping the European grid switch to renewable energies. Unlike other types of renewable energy, solar thermal power delivers electricity as needed and could therefore be used to stabilise the grid. The statement was compiled by leading European scientists. The working group was headed by Professor Robert Pitz-Paal, Co-Director at the Institute of Solar Research of the German Aerospace Centre in Cologne.

Further information and the statement itself are available at: www.easac.eu