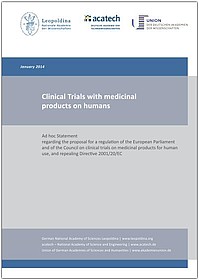 Ad hoc Statement regarding the proposal for a regulation of the European Parliament and of the Council on clinical trials on medicinal products for human use, and repealing Directive 2001/20/EC

Under European Union law, clinical trials carried out on human subjects for medicinal products are regulated by Directive 2001/20/EC. This stipulates that the foreseeable risks and burdens must be weighed against the anticipated benefit associated with a clinical trial for both the trial subjects and for other current and future patients. A potential group benefit alone can be justified only if there is only a minimal risk or minimal burden. Minors and incapacitated persons are given special protection. Further important elements in this are the assessment and vote by an independent ethics committee. In addition to the Directive, national law is to be applied if it is stricter.

The Consequences of Directive 2001/20/EC

In the past this Directive has been criticised for the following aspects, among others: it does not adequately stimulate clinical research within the EU and the lack of harmonisation puts the safety of participants in clinical studies at risk. A further point of criticism relates to the level of bureaucracy, which makes applying for and carrying out non-commercial (long-term) studies for the continual improvement of intervention with medical products and the safety of therapy for serious illnesses such as cancer – especially for children – more difficult.

Amendments to be introduced by a new EU Regulation

It is emphatically to be welcomed that the proposal for a new regulation concerning clinical trials of medicinal products for human use is intended to harmonise, shorten, simplify and make more cost-efficient the procedure involved. Furthermore, clinical trials for the treatment of particularly vulnerable patients are to be facilitated or made possible. In order to ensure harmonisation across the EU the new regulation should take precedence over national law. This too we explicitly endorse.

Problematic consequences of the draft of the new Regulation

Nonetheless, however welcome the intention, the proposal, if implemented without amendment, would have the following ethically questionable consequences: (1) The protection of minors and incapacitated persons could be reduced compared to existing legislation, since more extensive national protective regulations, such as the German Medicinal Products Act (Arzneimittelgesetz, AMG), could become ineffective. (2) The inclusion of an independent and comprehensive ethical assessment could be dropped. (3) For cross-border studies, a reporting Member State with lower standards could be
selected in order to avoid having to meet more stringent standards. (4) In any assessment of tenability, the non-reporting Member States would be almost completely excluded from the ethical review of the clinical trial. The Bundestag, the Bundesrat and the relevant committee of the European Parliament have all taken a critical stance in response to this Regulation. Against this background, the following ad hoc report records points of criticism expressed by the aforementioned, addresses other critical points and formulates recommendations, particularly with regard to the areas (A) protection of clinical trial subjects, (B) Europe-wide harmonisation, (C) the role of the Ethics Committee and (D) the procedure for arriving at consensus across the EU states involved.