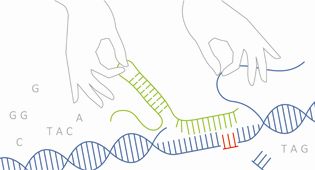 It sounds like a promise of salvation: diseased segments of DNA are cut out using molecular scissors and replaced with healthy segments. That is the basic principle of genome editing. Yet these new methods are also controversial. While robust, high-yield crops can help combat famine, concerns are also growing about their unpredictable impact on the environment. New cures and treatment methods raise questions about the possible long-term effects of interventions to the germ-line.

CRISPR/Cas9 is a new biotechnological tool whose development was inspired by the self-defence strategy used by the bacterium Streptococcus pyogenes. If a virus infects the bacterium, the cell replicates segments of the virus’s DNA and integrates it into its own DNA. These joined-up segments are called CRISPR (Clustered Regularly Interspaced Short Palindromic Repeats) and function as guides that recognise the virus. Cas9 is the protein that cuts the DNA (Cas9 = CRISPR-associated protein 9). If the same type of virus invades the bacterium, the Cas9 protein can give the CRISPR segments a piggyback. The CRISPR-Cas9 complex then seeks out the virus DNA and cuts it up, making it harmless.

Scientists can now construct these molecular scissors in the laboratory. They can programme the CRISPR guides to seek out and cut any segments of the DNA they wish. Individual genes can be removed or replaced. This means it is now possible to “rewrite” DNA in a targeted way. The technique is efficient and precise and the changes made using CRISPR can usually no longer be detected at a later stage. As a result, vast new horizons have opened up in genetic engineering.

Pros and cons of genome editing

All publications on the topic (German)

Experts on the topic