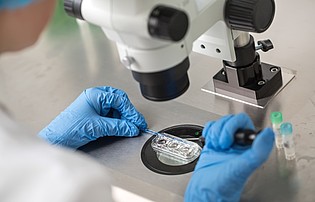 The "Elective Single Embryo Transfer" (eSET) is used in many countries. Here a higher number of embryos is produced during artificial insemination. Among these embryos, the one with the highest chances for development is selected and transferred to the woman.

In Germany, on the other hand, it is not permitted to planfully produce more embryos than will later be transferred to the woman. This is intended to prevent the creation of so-called surplus embryos. It is therefore impossible to choose from a higher number of embryos in terms of their development potential.

In addition, couples and women in Germany have to bear a considerable share of the costs for in vitro fertilization treatment themselves. As a result, women in Germany often have two or three embryos transferred in order to increase their chances of becoming pregnant. This leads to a greater likelihood for multiple pregnancies, which are not only risky for the woman but especially for the children.

Medical ethicist Urban Wiesing on the difficult question of selection: "Be careful that this justifiably highly charged term does not become a discussion stopper“. (German)

Publications about the topic (German)