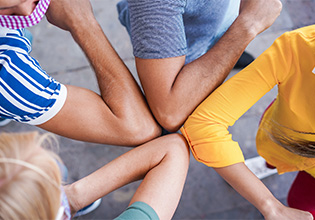 Whether plague or Spanish flu - mouthguards, isolation, and quarantine have already been effective protective measures against the spreading of a pathogen in the past. Today, we have additional technical means at our disposal. Data on the occurrence of infections is collected daily, and the spreading of the infection in the population is recorded promptly. New technology is also used to extend protection. For example, contact tracing apps can indicate a risk encounter and facilitate the interruption of infection chains.

One of the major pandemics – the Spanish flu

Major pandemics of the past were the plague and cholera. There have been three plague pandemics in the history of Europe with several million victims. The bacterium Yersinia pestis causes fever, aching limbs, and bumps on the lymph nodes in humans, which is why this form of the disease is called bubonic plague. Today, bubonic plague can be treated with antibiotics. If the pathogen attacks the lungs, it leads to pneumonic plague and ultimately to death.

The Spanish flu also caused numerous deaths at the beginning of the last century. Between 1918 and 1920, an estimated 20 to 50 million people died from it, more than 400,000 of them in Germany. The virus caused coughing, high fever, and pneumonia. It probably originated in the USA and was brought to Europe by soldiers. The first reports appeared in Spain and gave the disease its name. Until today the origin of this zoonosis has not been clarified precisely. However, it is suspected that the pathogen derives from a bird flu virus.

Medical historian Alfons Labisch on the traces that pandemics leave behind: “There are behavioral changes and after-effects in society, art and literature.” (German, English translation below)

Immediate measures against pathogens have hardly changed until today. During the plague in the middle of the 14th century, people already used cloths as mouthguards and vinegar water for disinfection. Italy sealed off entire cities and controlled goods and traffic. People with symptoms had to be quarantined for 14 days; the sick were isolated in plague houses. Entire cities were burned down to eradicate the pathogen. In early 2020, China isolated the city of Wuhan and the surrounding region for weeks to contain SARS-CoV-2, and public life was severely restricted for a certain period of time in many countries around the world.

The medical historian Alfons Labisch on immediate measures in the past and today: “Today the measures are scientifically proven.” (German, English translation below)

Medical historian Alfons Labisch on the containment of pandemics: “Reactions have always depended on time and culture.” (German, English translation below)

Today these traditional measures are supported by technical options. Infection counts and research results can be exchanged between countries much faster, people can be informed more easily, and so-called contact tracing apps can detect and interrupt infection chains more rapidly.

The world will probably continue to be confronted with pandemics in the future. However, there are ways to reduce the transmission of pathogens to humans and thus contain the spread of pandemics. In consideration of the One Health concept, such measures involve changing the way wild animals are treated and respecting their habitats. In addition, hygiene measures and health concepts for key regions and international travel are reasonable to prevent the rapid spread of a new pathogen around the globe.

Thomas Mettenleiter, head of FLI, on the relationship between humans and animals: “We can reduce the contact points.” (German, English translation below)

Medical historian Alfons Labisch demands: “We must not allow pandemics to develop in the first place - under the condition of maximum freedom of movement.” (German, English translation below)

Medical historian Alfons Labisch says: “We have to do it like we did in the 19th century. Back then, it was mainly industrial and key regions that were rehabilitated.” (German, English translation below)

Previous Page: How are Infectious Diseases Investigated and Treated?

Next Page: Publications on the Topic

How are Global Outbreaks Managed?

How are Infectious Diseases Investigated and Treated?

Publications on the Topic (German)

Information on the Coronavirus Pandemic

Overview of the Leopoldina's Statements on the Coronavirus Pandemic