Leopoldina Annual Assembly discusses the Value and Protection of Diversity

Image: Markus Scholz for the Leopoldina

The decline of biodiversity is one of the greatest societal challenges of the 21st century. This is why “Biodiversity and the Future of Diversity” was chosen as the topic of this year’s Annual Assembly of the German National Academy of Sciences Leopoldina, which is being held in Halle (Saale) on Friday, 24 September, and Saturday, 25 September. Researchers are coming together for two days to discuss why biodiversity must be preserved and promoted and how this can be achieved.

Anja Karliczek, the German Federal Minister of Education and Research, and Reiner Haseloff, Minister-President of the State of Saxony-Anhalt, gave opening remarks in the morning.

“The loss of biodiversity has significant negative impacts on our planet’s ecosystems and living beings – including humans. This is why the onus is on all of us to act with urgency. It is of great importance that the Leopoldina’s Annual Assembly is bringing together outstanding scientists to discuss the future of biodiversity,” says Gerald Haug, President of the Leopoldina.

Topics covered by the scientists attending the Annual Assembly include the impact of human activity on biodiversity, suitable methods of gathering relevant data as well as measures to promote biodiversity. Other issues include the role of biodiversity in food production, the influence of plant protection products, the role of the human microbiome as well as psychological processes that influence the environmental behaviour of people. The biologist Ulf-Ingo Flügge, member of the Leopoldina, has been responsible for the scientific coordination.

Christian Wirth, a spokesperson for the German Centre for Integrative Biodiversity Research (iDiv) in Leipzig/ Germany, will deliver today’s evening lecture, 24 September at 8:15pm. Under the headline “Biodiversity – impact and change”, the biologist will be speaking about humanity’s relationship to biodiversity and how this relationship has changed over the course of the last 30 years.

Yesterday, on Thursday, 23 September, the Leopoldina’s Senate elected the paediatrician Jutta Gärtner as new Class III Secretary – Medicine. She will succeed the ENT specialist Hans-Peter Zenner who has been a member of the academy’s Presidium since 2010. The human genetics specialist Claus R. Bartram was re-elected as Class II Secretary – Life Sciences. The Senate also re-elected the geophysicist Wolfgang Baumjohann as Presidium representative of the Austrian academy members.

This morning, the Leopoldina honoured nine outstanding researchers with prizes and medals for their contributions to science. You can find all press releases on the laureates. The biodiversity researcher Patrick Weigelt received the “Leopoldina Early Career Award“ endowed with 30,000 euros, financed by the Commerzbank Foundation. In his lecture, he presented findings from his research on island plant diversity. Moreover, Jörg Hacker, former president of the Leopoldina, was presented with the Order of Merit of Saxony-Anhalt.

The Leopoldina offers a livestream of the Annual Assembly on their YouTube channel. This feed is available from 9:00am on both days of the event. The lectures are held in German and English and are simultaneously interpreted. You can find the full programme for the Annual Assembly and further information on the Leopoldina’s website.

Impressions of the Annual Assembly 2021 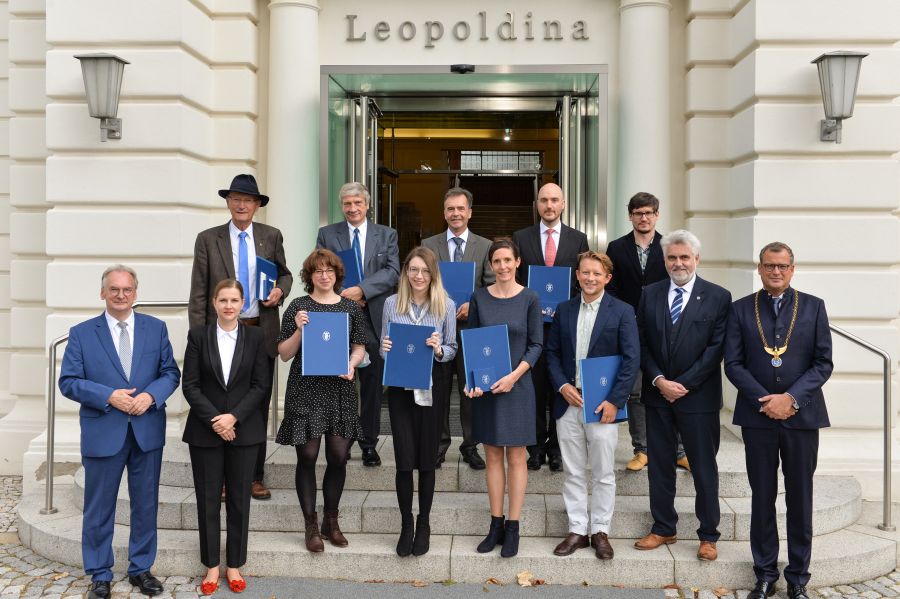 Image: Christof Rieken for the Leopoldina

END_OF_DOCUMENT_TOKEN_TO_BE_REPLACED

Video recording of the event

Press Release on the Annual Assembly

Press Release on the Laureates (only German)

Press Release on the Early Career Award 2021 (only German)

Programme of the Event

YouTube-Channel of the Leopoldina