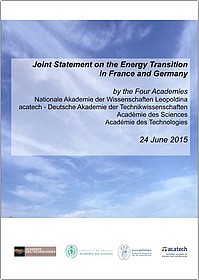 A source of welfare, health, social and economic development, energy is essential to human life. Meeting world energy demand, restraining energy consumption in developed countries, and reducing global emissions of greenhouse gases (GHG) raises fundamental challenges for the future of our planet. Because the problem is so pervasive and because of the approaching 21st UN Climate Change Conference, COP 21, the four National Academies of science and technology in France and Germany decided to enhance their mutual cooperation and to organize two workshops on the “energy transition”.

This initiative is intended to provide a framework for sharing knowledge, anticipating future challenges, identifying areas for closer cooperation between our countries and generating advice for decision makers and society in general. The workshops defined priority areas for further collaboration. These include energy efficiency, grid infrastructure and smart grids, mobility, nuclear energy (fission): safety and waste management, fusion, renewable energies, energy storage as well as social and economic aspects of the energy transition.

In view of the complex challenges, compounded by the political debate, and the different conditions and starting points for the energy transition in the two countries, the four academies also identified the following common lines of action.

1. Creating a sustainable energy system. The overriding aim of energy and climate policy in this century will be to create a sustainable system of energy supply, i.e. one in which GHG emissions are substantially reduced world-wide, while at the same time ensuring security of supply. This will require a long-term perspective, as well as a suitable balance between environmental goals, social expectations, and economic objectives.

2. Promoting collaborative policies. The academies welcome the stated intention of both governments to support effective energy and climate policies on a European level through the medium of a European Energy Union. This will make energy more sustainable, affordable and secure, and produce policies thatare compatible with those implemented in other parts of the world. In this spirit, the academies particularly encourage the effort of both governments to reach an ambitious international climate agreement during COP 21 in Paris at the end of 2015.

3. Asserting the central role of science, technology and industrial development. Achieving an efficient energy transition resulting in a substantial net reduction of GHG emissions raises complex issues that are usually underestimated. They will require solutions that are fundamentally based on science, technology and industrial know-how. The academies thus support strong funding programmes for energy R&D, in particular for long-term basic research in cross-cutting topics. Such programmes should focus on novel approaches and, if designed properly, would also help to improve the international competitiveness of European industry.

Finally, the academies suggest the establishment of an academy-led French-German consultative research committee which could discuss both research issues of mutual interest and priorities in connection with the energy transition. It could also provide a means for assessing developments in our two countries.

Joint Statement on the Energy Transition in France and Germany (pdf)