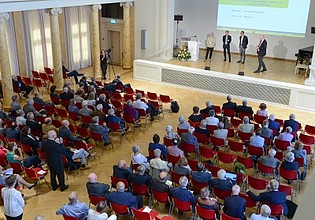 Clocks in Translation: Circadian Rhythms in Health and Disease

Our laboratory studies the composition and architecture of circadian networks in plants and animals. These networks provide adaptive advantages to organisms, and are now known to be pervasive in their integration with many other regulatory modules in multiple cell types. We employ high throughput genomic and chemical biology pipelines to identify network components and apply mechanistic approaches to understand their detailed function and interactions.  In both plant and animal systems we have found that circadian networks are hierarchical and composed of regulatory layers that act at the transcriptional and post-transcriptional levels. Increasingly we are finding that circadian regulation is tightly integrated with metabolic networks and operate with reciprocal regulatory interactions.

Now that we have a reasonably robust knowledge base at hand, we can exploit our understanding of the composition and dynamics of clock proteins for specific translational use in agricultural biotechnology in crop species and drug discovery in humans.  Specific examples of such knowledge translation will be presented.

By studying how circadian rhythms and sleep are regulated (entrained) by the dawn/dusk cycle we demonstrated the existence of a “3rd class” of photoreceptor within the eye and showed that these new photoreceptors comprise a small number of photosensitive retinal ganglion cells (pRGCs) that utilise the blue light sensitive photopigment melanopsin (OPN4). Whilst there has been remarkable progress in understanding the complex intracellular mechanisms that generate circadian rhythms, the molecular pathways whereby the pRGCs entrain circadian biology has remained poorly understood.

The suprachiasmatic nuclei (SCN) are the site of the primary circadian pacemakers within the mammalian brain, and until recently, the model for entrainment involved a simple linear pathway whereby glutamate release from the pRGCs resulted in Ca2+ influx and raised intracellular cAMP in SCN neurones. This in-turn resulted in CREB phosphorylation leading to increased transcription of two key clock genes, Per1 and Per2, which either advanced or delayed the molecular clockwork. However, an important feature of entrainment is that circadian responses to light are limited – as typified by jet lag. Full recovery from jet lag requires a day for every time-zone crossed. We addressed this issue and have identified and characterized a key role for Salt Inducible Kinase 1 (SIK1) and the CREB-regulated transcription co-activator 1 (CRTC1) in clock re-setting. In addition, our more recent and unpublished findings have shown that light entrainment also involves the parallel activation of a Ca2+-ERK1/2-AP-1 signalling pathway. Thus, both CRE and AP-1 regulatory elements drive light-induced clock gene expression.

These findings then led to a new understanding of how sleep/wake behaviour modulates the effects of light upon the molecular clockwork. Adenosine builds within the brain during wake and dissipates during sleep, effectively encoding sleep/wake history. Pharmacological and genetic approaches demonstrated that adenosine also acts upon the circadian clockwork via A1/A2A signalling through the activation of the Ca2+-ERK1/2-AP1 and CREB/CRTC1-CRE signalling pathways to regulate the clock genes Per1 and Per2. We show that these signalling pathways converge upon and effectively inhibit the same pathways activated by light. Thus, the resulting phase shift of the circadian clock is the integrated product of sleep/wake history (via adenosine) and light.

Finally, the presentation will explore how such signalling mechanisms provide a potentially new and exciting target for the regulation of circadian rhythms and the “pharmacological” replacement of light for sleep/wake re-setting in individuals lacking eyes or in individuals with severe circadian rhythm disruption as seen in schizophrenia and dementia.

How We Use Time, and Why

Economists have done immense amounts of research on work time; but they have done very little research on how time is spent outside of paid work. With non-work time accounting for 20 hours each day for the average adult in Western economies, this neglect is remarkable. Using data from the US, France, Germany and the UK, this lecture examines how time is divided among various activities, including sleep and television-watching, the first and third most important uses of time. It shows how all of these uses differ among demographic groups and studies the effects of economic incentives--income and wage rates--on them. It examines how time zones affect our spending of time; it demonstrates how the stress that people feel about time is affected by their economic circumstances. It concludes by considering how changes in economic policy can lead people to alter their activities in order to generate a less stressful life in which time is balanced more evenly over their lives.